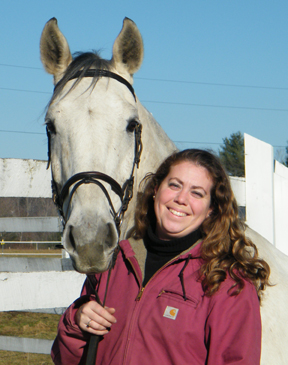 Karry Bengtson-Brothers is one of the fortunate ones who grew up around horses.  Her first pony was a little bay ranch horse who taught her many things, including the value of earning a horse's trust, and to never turn your back with a carrot in your pocket. She was blessed to learn horsemanship under Maureen Pach, of East Haddam, CT, even being granted the honor of riding Maureen's personal horse, "Big Boy."

After Earning her Bachelor’s Degree in Communications and Master’s Degree in Advertising Karry embarked on a college teaching career but found that she always came back to horses. With her purchase of Houdini, a probable Cleveland Bay Sporthorse, from Cathy Drumm, she decided to focus on building her dream. In April of 2008, Karry and her husband Craig purchased Emerald-Glen Equestrian Center, LLC.  It is here that Karry and Craig are slowly putting together an equestrian facility to support education of equestrian pursuits.

Working with dressage riders is Karry's passion, but it was her goal to enter the "L" program that unexpectedly introduced her to the importance of understanding equine locomotion. To enter the "L" program she needed to get into the competition ring and so she purchased Caesar Augustus, an Oldenburg gelding to retrain for that purpose.

It was in the early days of working with Gus that Karry discovered that he needed major physical and mental rehabilitation to teach him how to use his body properly. She enlisted the help of good friend Nanci Worthington, LMT, with whose help Karry discovered an entirely new world of how to educate a horse to move more easily.

Having achieved tremendous success with rehabilitating numerous horses like Gus over the years, Nanci developed the Equine Massage curriculum at Post University in 2009. From there she began to design clinics and workshops for all levels of horsemanship, from Pony Clubs and summer camps to an intensive certificate program for the equine professional. What makes Nanci's program special is the focus on the entire horse, both physically and mentally and how these affect the way it moves – or doesn’t move.

In 2015, Karry qualified for the United States Dressage Federation "L" Program when Maria Quartuccio loaned her a fabulous Lusitano, Tempi (Troll VO). With Paige Strait coaching, Karry was able to qualify for the L program in two shows at 2nd level, then competed at 3rd level and earned her USDF bronze medal at the third show!  In 2016, just for giggles, Karry and Tempi had a little more time to try out 4th level and earned scores for half of Karry's USDF Silver Medal. Tempi is now back home with Maria at Dance Floor Farm in Meridan, CT.

Karry graduated from the L program in October 2015, and has taken on a new challenge with an IALHA young mare, Chica de Chocante.  Karry plans to bring her along while pursuing her USEF small r in Western Dressage. 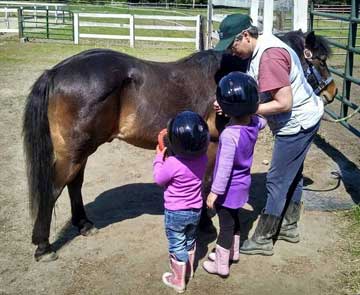 When she was finishing her master’s degree at New York University in media studies and education in 1993, Janet focused on alternative education—but didn’t yet imagine the alternatives would include a riding arena. But a series of experiences—as a clasroom teacher, a freelancer, a mom, and an adult-beginner rider—led her to become a licensed Massachsuetts riding instructor in 2010 and a Registered Instructor with the Professional Association of Therapeutic Horsemanship (PATH) International in 2011. She worked with Equus Therapeutic in Williamstown and then Lanesboro, MA, for five years, and now finds working with beginner riders and riders with special needs some of the most exciting teaching she has ever done. “Introducing children—and adults, for that matter—to horses opens up a world of sensory, physical, and emotional experience like nothing else in the world,” she says.

Her daughter’s ex-racehorse, Louie, has been boarded at Emerald Glen since 2008, and her own draft cross, Java, has called it home since 2016. Janet completed her apprentice teaching under Karry and has a deep admiration for Karry’s versatility and her standards of excellence.